If you’re looking for a delicious, quick and easy pickle recipe, you’ve got to try out this bread and butter pickle recipe. The best part is that it makes a small batch or you can double it and make more! 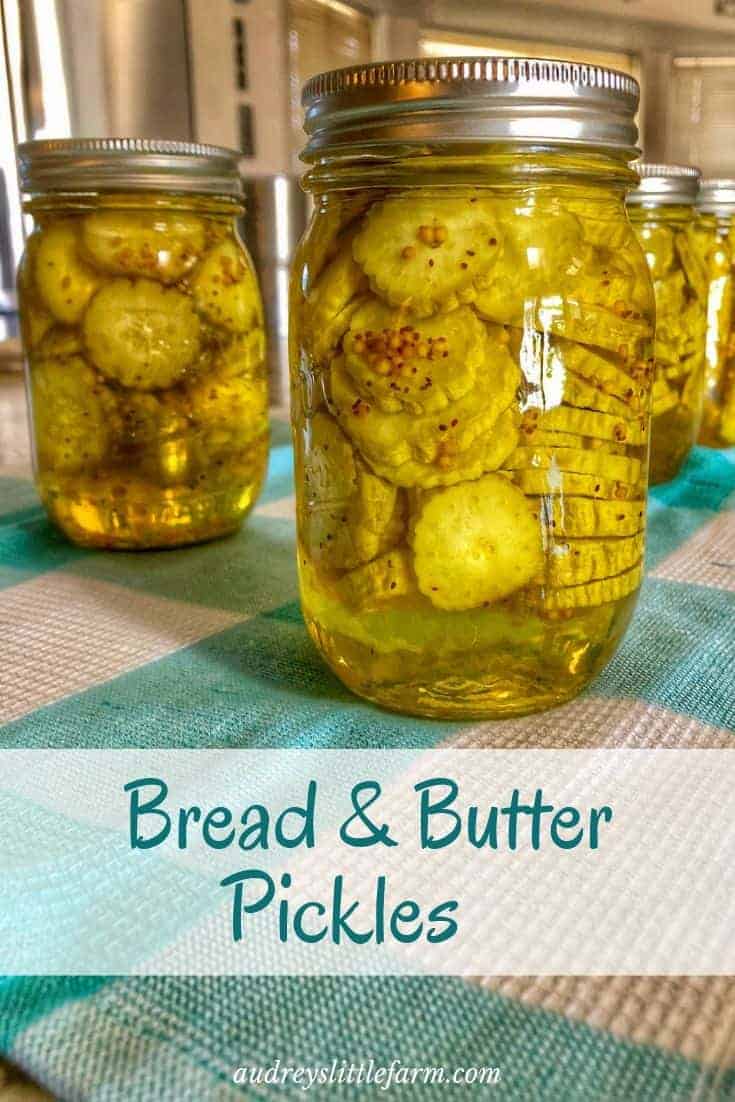 There are so many great reasons for making pickles!

It uses up your extra garden harvest.

It is a fairly quick process if you’re using a fresh pack recipe.

And they can store for up to a year if sealed right.

So why wouldn’t you want to give it a try?

Well I can tell you after my experience last year, I was pretty convinced that it would be my last time ever making pickles!

I made a huge batch of dill pickles, followed a recipe that recommended that they sit for 2 weeks before trying and after 2 weeks of anxiously waiting I finally opened up a jar and they were the most bitter disgusting thing I’d ever had.

So then I thought that it must just be a bad jar… I ended up opening every jar and they were ALL bad!

I started doing some research and realized there are a few things that can contribute to bitter cucumbers. But the conclusion I came to for my batch of bad pickles was that they all contained a lot of cucurbitacin.

Which is a compound in cucumbers that causes bitterness.

It’s typically more present near the stem end of the cucumber and in the skin, and in my case I think it was pretty much the entire cucumber because they were extremely bitter.

They are actually a part of the melon family, but they taste like a cucumber and have zero bitterness.

So my pickles this year have all been substituted for Armenian cucumbers and they are some of the best homemade pickles I’ve ever had.

How to Make Bread and Butter Pickles

How to Prepare Cucumbers:

Everybody likes a crunchy pickle and it’s one of the hardest parts about making them homemade. They tend to be a little mushy sometimes.

But the best way for them to turn out crunchy is to can them the day that you pick them. A fresh cucumber will always turn out the best.

But if you have to wait a couple days you can put your cucumbers in a large bowl topped with pickling salt and ice and keep them in the fridge.

This can even be done for just a few hours before making your pickles to help with the crunch.

I also like to use pickle crunch which are granules that are added to each jar, and it seems to help out.

Wash jars in hot soapy water or a dishwasher, whether they are new or old.

Then submerge the jars into a large pot filled with water until they are covered and bring the water to a simmer around 180 degrees F. Keep the jars simmering until they are ready to use and remove one at a time as it’s being filled.

You should heat the jars for at least 10 minutes before you fill them to help prevent breakage.

Always use new lids when canning, but the bands can be reused.

Wash the new lids and bands in hot soapy water but don’t use anything abrasive because it could damage the seal on the lids.

After washing, set the bands aside to dry and put the lids in a pot of water. Bring the water to a simmer (180 degrees F) and keep at the simmer until you are ready to use them.

Fill your water bath canner half way full with water and bring to a simmer (180 degrees F). Then place the canner rack above the water and as jars are filled put them on the rack.

If you’re looking for a quick way to get your large water bath canner to a simmer and boil, I use a propane burner that heats up extremely fast. You can find out more about it by checking out my article “The Simple Product That Made Canning Better Forever.”

Now that all of your materials are ready it’s time to start preparing the recipe.

First, wash your cucumbers and cut a 1/16″ off of the blossom end.

For the best crunchy pickles you want to use as fresh of cucumbers as possible. So try to can the same day that you harvest.

Second, combine the Mrs. Wages bread and butter mix, vinegar, and sugar into a large nonreactive saucepan. Bring to a boil and then immediately remove from heat and set aside.

Third, if you’re using pickling cucumbers, you can leave them whole or sliced, but sliced is recommended. If you’re using Armenian cucumbers then cut them into spears or slice them thinly.

Fourth, pack your sliced cucumbers into your hot jars and cover with the brine. I remove one jar at a time from the hot water, pack it, pour on brine, remove air bubbles, put on the lid and band, and then place it on the canner rack.

I have done a combination of spears and sliced cucumbers cut about an 1/8 – 1/4 inch thick and they’re both great. But for the bread and butter pickle recipe I prefer the thin slices. 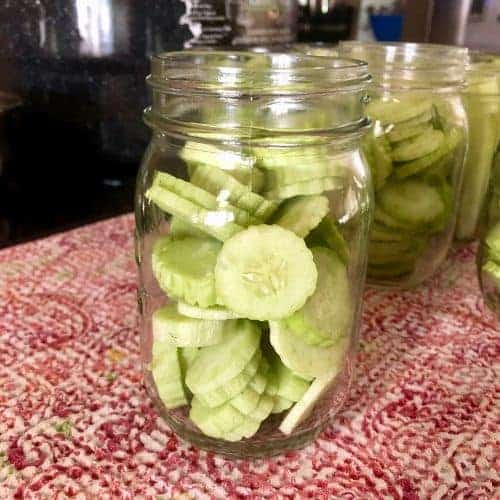 After you pour on the brine I put a rounded 1/8 tsp. of pickle crisp into the jar for pints or 1/4 tsp. into quarts. This will help make your pickles crunchier and if you can’t find it in your local store you can get it on Amazon.

Then use a non metallic spatula to remove the air bubbles.

How to Remove Air Bubbles:

Putting on the Lids:

After you pack each jar and fill it with brine, wipe down the rim to make sure it is clean. Then take a lid out of the simmering water and put it on the jar.

Then screw on a band and tighten until it is finger tip tight, you don’t want to over tighten.

After the lid and band is on, place the jar on the canner rack.

Once you have all jars filled and placed on the canner rack then carefully lower the rack into the water bath canner. The jars should be 1-2 inches below the water and so add in boiling water if needed.

Turn the heat to a medium/high and once the water is at a rolling boil then start a timer for processing.

After the the jars have processed, turn off the heat and let the jars rest for a few minutes. Then carefully take the jars out of the canner and set them on a towel. 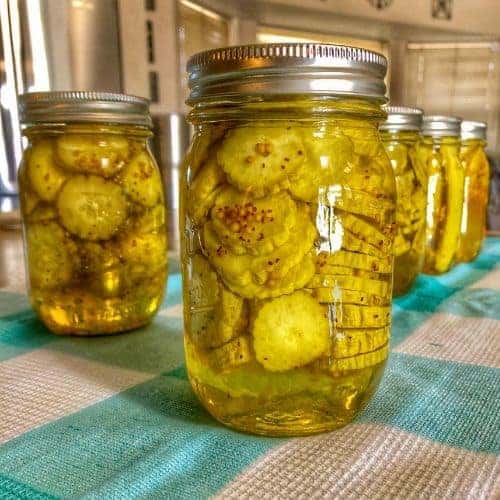 Let the jars rest at room temperature for 24 hours. Anything that has not sealed after that should be put in the refrigerator and used within a week.

When Can You Eat the Pickles?

This great recipe is ready within 24 hours! Which is part of the reason why I love it. It’s really hard waiting weeks to try something. But you should put the jar in the fridge first because they are best when they are cold.

How to Know if Jars Have Sealed?

Jars will usually make a popping sound when they seal.

But to double check, if you press on top of the lid and the center does not flex up and down then it is sealed.

Do You Have Extra Brine?

Extra brine can store in the fridge in a sealed container for up to a week.

This is great if you’re just making a small batch of bread and butter pickles because then you can make a few jars later on in the week.

Store the pickles in a cool, dry, and dark spot around 50-70 degrees F. They should be good for up to a year.

The great thing about pickles is that you can pretty much add anything that you’d like.

You can add cucumbers and onions into each jar. You can add in sliced carrots, peppers, garlic, or really anything that sounds good!

The best part is the brine can stay original but you can just add variation to a few jars to see how they turn out. You don’t have to change the entire recipe for all.

This bread and butter pickle recipe can make a small batch with leftover brine or a larger batch if you use up all of the brine.

That means you can even choose to save some of the brine and try your pickles before you make more. That way you can make more of your favorite. For another great canning recipe check out:

Previous Post: « The Simple Product That Made Canning Better Forever
Next Post: How to Make a Dust Bath for Chickens » How to Clean Your Chicken Coop

How to Plant Strawberries